The Metropolitan Transit Authority’s Holiday “Nostalgia” Train is another reminder of the holiday spirit in the city. The train rolls down on the tracks between Second Avenue and Queens Plaza along the M line every Sunday through Christmas (November 27th, December 4th, 11th , 18th ). The train is made up of eight R1/9 subway cars that were in service from 1932 until 1977. With a swipe of your MetroCard ($2.75), passengers are able to get on the train and take a trip back in time. You will find ceiling fans, padded seats and incandescent light bulbs among other vintage decor in the facilities on the train.

The public has expressed mixed feelings towards these old trains. Some people are excited because it is their first time to take the “Nostalgia” train, and will have a distinctively different experience in these trains compared to modern subways.

However, for others, the train brings them back to their childhood in the 1930s. For example, Vino Vinehaus, a man in his late sixties, remembers the old train well. He recalls how the conductor needed to be outside to stand between cars on rainy and snowy days to lock the chains. He says that he appreciates that the MTA has made special efforts to bring back the nostalgia train, and to allow us to “once again go inside the train that we used to get in when we were very young.”

Passengers are encouraged to dress up from the 20s, 30s, and 40s for the journey on the M line. Many people dressed in period costumes, including items like jackets from World War II in the 1940s, tilt hats, and Shanghai Qipao dresses from the 1920s. It is interesting to see how their clothing matches with the old train, and how their clothing reflects the various cultures in the city. People can not only experience the “Nostalgia” train, but also reminisce about the old days through exploration of past fashion trends. 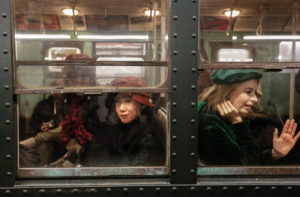 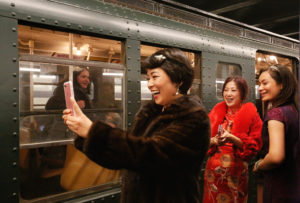 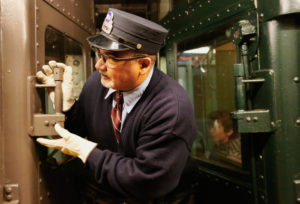