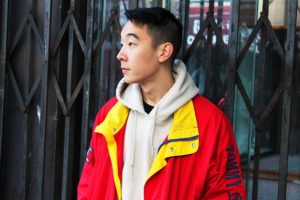 During his junior year at UC Berkeley, Charles Yan, an underground rapper under the moniker Chow Mane, had to research about his family business history for a class. As one of the only second-generation Asian-Americans in his predominately white class, Yan tried to weasel his way out of the assignment, explaining to his white classmates, who had longer backgrounds in the US, that he did not have a family business history.

But after failing to excuse himself out of the assignment, Yan was surprised to discover more about his family history not only as business owners, but also as refugees.

“My grandparents escaped to the United States because there was a Catholic Church that sponsored them to come,” Yan, 22, said. “My grandparents worked in a restaurant for 10 years, and my grandfather was actually able to start his own Japanese restaurant.”

Yan, fascinated by his findings about his own family history, drove to his local studio to condense his family narrative into one three-minute rap.

Yan’s debut song Mooncakes is contextualized in times when dialogue concerning refugees and immigrants is a prevalent political talking point. But Yan holds onto the personal intention behind the song lost in the political interpretation.

Yan started producing and writing music during the MySpace era in middle school over a cheap headset in his “studio”, or his parents’ garage, but wrote “nothing really concrete.” Throughout high school and college, he was constantly experimenting with improvised bars over makeshift beats.

“In my raps that I wrote since high school, I was touching more about generic rap topics,” Yan said. “After I found a little bit more about my background and family history, I started telling stories that are unique to myself.”

While Yan acknowledged how the song may sound politically charged within the current times, Yan was merely writing about the harsh reality behind his family history and his upbringing.

“I mean I’m influenced by the society we live in and what I see every day,” Yan said. “But it wasn’t explicitly political–it’s just about my story and how I feel.”

“I wanted to capture part of their backstory in a way that’s more sentimental,” Yan said. “I wrote Mooncakes to be nostalgic and to talk about something that means something to me.”

Despite Mooncakes’ release taking place amid the prevalent immigration debate, Yan does not claim to be a political spokesperson for the Asian-American community or the refugee immigrant community.

“I’m here just trying to talk about my own experience based on the Bay Area,” Yan said. “And that is something I knew enough to write music on.”