An increase in sales and subsequent flushing of so-called “flushable wipes” has created enormous mounds of congealed fat and wipes in the sewer system, sparking a public awareness campaign run by NYC’s Department of Environmental Protection.

These “fatbergs,” named for their fat content and resemblance to icebergs, have clogged sewer systems worldwide, including those in New York City, causing sewer backups and flooding, according to the DEP. 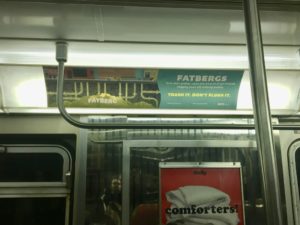 The campaign, titled “Trash It Don’t Flush it,” launched the week of Feb. 21.

“We hope to raise awareness generally about what is appropriate for flushing down a toilet or pouring down the drain, and what should be thrown in the trash,” said Edward Timbers, Director of Communications at the NYC DEP in an email statement.  “This is especially important when the wipes are being marketed and labeled as ‘flushable.’”

These wipes, marketed as “flushable” by major toilet paper companies like Cottonelle and Charmin, are causing a major problem in NYC’s sewer system and beyond, but continue to be misleadingly labeled.

According to Charmin’s website charmin.com “They’re flushable and safe for your sewer or septic system. But the DEP disagrees.

“When a product is labeled ‘flushable,’ it generally means that it will clear your toilet bowl,” according to the agency’s website fatbergfree.nyc. “It does not mean it will definitely clear your pipes or break down in the sewer system or at a wastewater treatment plant.”

Despite evidence in the form of fatbergs sometimes spanning 210 feet and weighing 130 tons, as was the case in London, this is not clear to many flushable wipe customers.

For those who think the problem is not theirs to worry about, the DEP’s website for the campaign assures them it is.

According to the campaign website, “Liquefied fat, oil, or grease that is poured down the sink can cling to the insides of pipes and sewers. Over time it can build up and block pipes completely.”

As also stated on the campaign website, “When wastewater can’t move freely through the sewer system due to these blockages, it can cause flooding in local neighborhoods and sewer backups in your home!”

According to the Director of Communications, the NYC DEP has been in contact with wipes companies, but to no avail.

“Wipes have been a growing source of revenue for the companies,” Timbers said and continued, “And they have challenged other municipalities in court when they attempted to regulate the product and how it is marketed.”

The “Trash It. Don’t Flush It.” campaign informs in a simple and easy-to-remember manner what we can and can’t flush.

What is okay to flush, according to the DEP, can be confined to the “Four P’s.”

“Poop, pee, puke, and toilet paper are the ONLY things to flush down the toilet,” according to the campaign website.

NYU said they were unable to comment on the campaign.