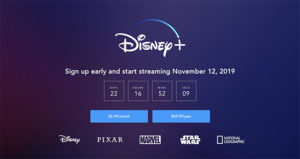 Streaming services are on their way to outnumbering potential subscribers, but Disney is still “getting their head in the game” with their recent announcement of Disney+.

I love a lot of Disney movies, but I don’t like the move towards privatized media and attempts to scrape more money from consumers,” said Arielle Faith Sabot, 21, a New York University student.

The service is set to launch on November 12th.  Disney+’s official Twitter account sent hundreds of tweets releasing the upcoming lineup, which include Marvel and Star Wars movies, as well as a large number of classic Disney animations.

Despite the lure of nostalgia ridden classics, the young people who grew up on these films don’t seem interested in paying for another subscription with fees that run from $6.99 a month to $69.99 a year.

“Currently my family pays for the streaming services I use and I’m not gonna pay money on my own for something I will barely use,” said Sabot. “It’s appalling how entranced companies are by capital gains.”

Nina Kritikos, 19, a Northwestern student, said she likely wouldn’t be subscribing to the new service because of how readily available the content already is online.

“[The films] are so easy to find online for free and the product Disney is selling is very limited in comparison,” she said. “I guess it depends on the price.”

New York Magazine  reported that when iTunes dominated music streaming, and Netflix covered TV and movies, it made sense to pay a simple monthly fee. Now that the streaming industry has splintered, the cost of all the different subscriptions is becoming too much for the single consumer.

Chloe Fulton, 19, a University of Illinois student, still has access to the Disney films in their pre-digital form.

“It’s a waste of money,” she said. “It’s sad that people are actually considering paying money for a Disney platform, especially when a lot of people already have the movies in some physical form, whether that’s DVD or VHS.”

NYU student, Kathy Bian, 19, said she would consider subscribing after she has finished school and has the time to enjoy the service.

“I’m not going to subscribe to a streaming service when I can’t even find time to watch TV, but I’d consider it in the future.” she said.

Despite the number of reasons young people might have to not hit subscribe, in 2017 Pew Research reported that the majority of people 18-29, exactly 61 percent, primarily got their television from streaming services.

In 2019, Forbes reported that the average Ameircan subscribed to 3.4 different services and paid approximately $8.53 for each of them every month.

Disney is attempting to become one of those 3.4 monthly subscriptions, but according to broader theories about the future of streaming, the short term profits of creating more services may be just that: short term.