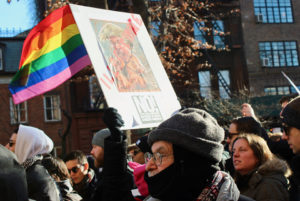 Yesterday, thousands gathered around Stonewall Inn to stand in solidarity with the LGBT community and other marginalized groups whose civil rights are currently being threatened by President Donald Trump’s administration. In the few weeks following President Trump’s inauguration, dozens of protests have erupted around the globe in a collaborative effort to combat the leader’s oppressive executive orders. […]