Photos of the East Village neighborhood “Loisaida” set to a poem by Bimbo Rivas. Photos by Tara Seewack. Voice over by Bosco Ballve.

Bittman “Bimbo” Rivas was born on November 11th, 1939 and helped pioneer the Nuyorican Movement in New York City. He coined the community’s name based on the Puerto Rican pronunciation of “Lower East Side” in his famous 1974 poem titled “Loisaida.” In true Nuyorican form, the poem alternated between Spanish and English and was soon adapted as the neighborhood’s cultural anthem. Rivas was a community activist, director, poet and actor who worked tirelessly to have the struggles, culture and talent of the Puerto Rican community acknowledged. Avenue C became known as Loisaida Avenue on May 27, 1992 to pay homage to Rivas’ contributions to the community and to show appreciation for his activism. Rivas passed away on May 21, 1992 of a heart attack at the age of 52, leaving six children behind. 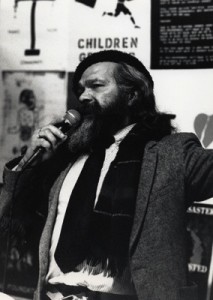 March 4, 1992. Bimbo Rivas reading from “Your House Is Mine” at Exit Art. Photo: Robert Engbers