At 6 a.m. almost daily for six years, Sean Baez, 37-year-old Bronx native and marathon runner has grabbed a pair of running shoes from his collection and trained. He enjoys running shirtless through shady parks like Orchard Beach to show off his stomach tattoo; his name in flaming graffiti font. However, his favorite place to test his mettle is on the street where he takes pleasure in out-racing traffic.

People in his neighborhood have come to recognize him. Baez says he loves running helps him interact with people like the man and his dog who tried to keep up with him or the little boy who yelled out, “Daddy look! He’s so fast!”

In order to squeeze in more miles throughout the week, Baez turns his daily commute from the Bronx to Manhattan into training and, “another opportunity for growth.”

Baez often runs with the Brooklyn Track Club. “I wanted to push my limits, push my speed, but also hang out with people who have similar interests to keep me focused,” he said. Baez works around New York as a beer salesman.

In 2002 he joined the Bridge Runner Club to ensure, as he says, that he keep ‘going the distance’. Together he and his fellow club members have travelled to cities like Chicago and Atlanta all in the name of running bridges. Baez says he enjoyed the experience, but found constant travel exhausting.

Baez’s commitment to a runner’s lifestyle is not without sacrifice. First and foremost, he has had to withhold from the array of Hispanic-food classics his mother pushes on him. And of course a runner has no time for late nights out with friends.

Baez says his sense of self-discipline was instilled back in 1999 while serving in the US Army. Baez and his squad were made to run five miles every day and although he hated every step, he put his head down and kept at it.

Today, Baez has learned the importance of mental toughness especially in long distance. “A marathon is a different beast—you’re thinking more, your body is telling you to stop, your mind has to be stronger,” he said. “If I have to be tired, I’ll be tired.”

There’s always another marathon and he plans to work harder for next time, but for this marathon Sunday at least he can finally fill up on his mother’s pork tacos.

Baez had hoped to get a time under three hours for the marathon instead his time was 3:33:29. He says that he is completely happy with the time although he blames himself. “I didn’t train for the pace I was going. After mile 17 it was all downhill.”

Baez says that all he can do is start again and work harder for next time, but for the time being he can finally fill up on his mother’s pork tacos. 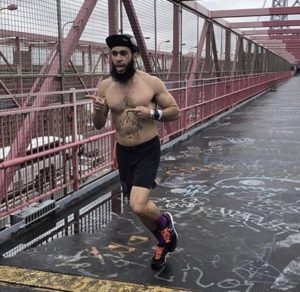