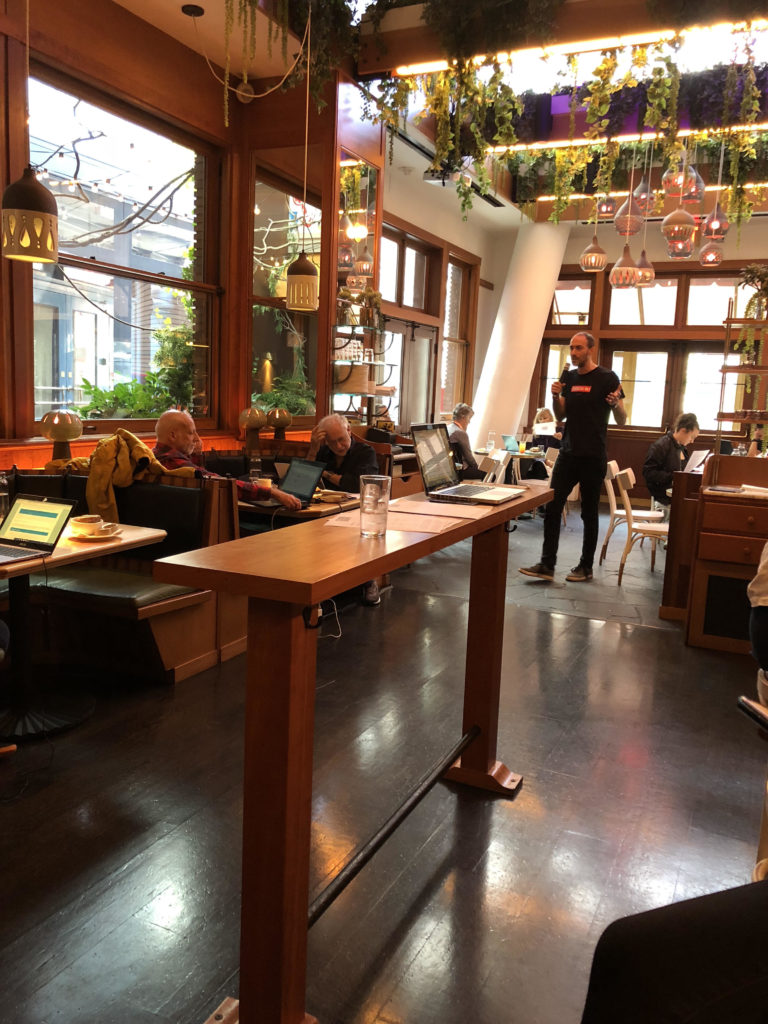 Phone banking during election season is a battleground of frustration and enlightenment. But doing so the last stretch of the weekend before the 2018 midterm elections can be a matter of life or death. It’s not easy to get up on a Saturday morning to phone bank for the American Civil Liberties Union at The Standard Hotel’s Narcbar.

The little luxury coffee-shop style bar was filled with people of all ages. Some of which who were first timers and some who have been veterans. College aged students anxiously re-read their scripts again and again in their booths to make sure that they weren’t going to stumble their words. Old men with new laptops recounted their first phone bank about 30 years ago. Middle aged women were blistering with confidence and embracing other volunteers who they have worked with in the past, asking how they have been, and what other canvassing jobs they were doing this past election season. While the bustle is going on, several volunteers ask for a cocktail from the bar or a cup of coffee to relax before asking strangers about their state legislation.

“So, are you sure you are registered to vote?” asked one woman volunteer to the bartender.

“Yeah, but somehow I’m registered for both Massachusetts and New York,” she said while the woman was frantically searching for her voter registration status online. It turns out she was in fact only registered for New York.

These civically engaged citizens are the forefront in the effort of making Virginia voters aware of Amendment 1 on their state ballot, which may restrict a woman’s right to abortion and gives leeway for politicians to pass more laws that are restrictive and puts a woman’s life in danger.

“We just want to give voters the last final push to say no on this amendment,” said ACLU organizer and Standard Hotel employee Caitlin McConnell. Pushing against the terrors of the current administration and even at state levels, the ACLU fights these unjust causes with the help of the average citizen sacrificing a couple hours of their time.

As an hour goes past, volunteers across the whole bar are glued to their laptops reading the provided script and calling Virginia voters through the phoning service Hubdialer. Volunteers flew by some of the calls with the average call being around 30 seconds and being constantly rejected.

Many of the Virginia constituents become frustrated at the first phrase of a phone banker. After a very unsuccessful call, one volunteer expressed at the corner of the bar, “I just got off the phone with a man who said, ‘I don’t want to talk about politics with a stranger. Bye.’”

Despite these negative interactions, there are some eager voters who want to challenge the Amendment. A woman volunteer matched with a voter named Christopher who was too enthusiastic about voting no. He rambled for 5 minutes about how the administration is failing and commended the volunteer for taking the time to call him. Before reading the script and saying her last remarks, she thanked him, “I’m going to think about you when I go to the polls, Christopher.”