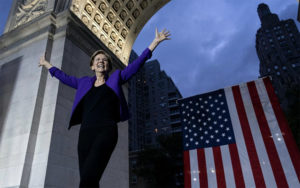 Elbow room was scarce at New York City’s Washington Square Park yesterday  as over 20,000 voters crammed in to watch Senator Elizabeth Warren vie for their support in the upcoming democratic presidential primaries.

At just past 7 p.m., over four hours past the time people began gathering in the park, Warren took the stage. She wore what has become known as her uniform: a colorful blazer, wire rimmed glasses, and a selfie smile poised at the ready. This unassuming appearance, matched with her increasingly progressive politics, has led to the public’s perception of what is now one of Warren’s biggest buzzwords: genuineness.

Andy Laub, a steadfast supporter and rally attendee, who has been volunteering for Warren since her first senate campaign, said Warren had a unique ability to connect with voters, due in part to her modest upbringing and experience navigating the modern reality of Americans’ economic instability.

“She can speak to that economic anxiety… that led [voters] down the bad path to Trump last time, and can bring them back this time,” said Laub.

In her Monday night speech, Warren said her goal was to combat not only President Trump’s policies, but wider examples of corruption throughout Washington.

“A country that elects Donald Trump is already in serious trouble,” she said.

Warren is building a platform on the promise of fighting corruption and frequently refers to her goal of creating “big structural change.” This phrase has become popular among her followers. At one point, they chanted it with her during her speech, and the moment led to one of the biggest rounds of applause that night.

The structural focus of Warren and fellow progressive candidate Bernie Sanders has resonated with a multitude of voters. On average, the two remain tied for second place in polls, following leading candidate Joe Biden.

Eleanor Hill, a young voter and one in the throngs of supporters camped out in Washington Square, said she prefers Warren over similar candidate Sanders, because she believes Warren is more focused on the feasibility of her policies. Hill described Warren as someone who “walked the line of being rational and measured” while still shooting for ambitious goals.

“She has more radical policies, like a Bernie, but her attitude and her approach to it is more methodical,” she said.

Warren has become known as the woman “with a plan.” The moniker is splayed all over her t-shirts and rally signs. She has released a large number of specific policy proposals on her website already and continues to add to them. Warren spent the majority of her speech outlining the potential impact of her policies and vowed to “take down the for sale signs hanging outside every federal building in Washington.”

Although it has not been a large focus of her campaign, Warren also took a moment to acknowledge her historic role as one of only a few female presidential candidates.

“I love the thought of what a president can do all by herself,” she said.