Nicolás Parodi speaks in a manner of brisk assurance, his voice bursting through the phone in a succession of crisp quips, despite the torrent of honks and footsteps emanating from the city he paces through. The clarity of his speech, a Castellano that is deep, smooth, and patient, in contrast to the city noise, is no surprise considering his stature. Parodi stands at about 6’3″, and with a rounded out frame and light brown complexion that would contextually be described as “cafe con leche”, there would be no easier feat than to pick him out from a crowd. What is most notable about the photographer sits atop his head. A nest of thick black hair protrudes from his scalp for about two inches before morphing into a streamline of rope-like raven tresses. The ebony branches fall haphazardly around him, some reaching a callus beard just as dark, and others dusting against the small of his back. His dreadlocks, tokened las rastas in Spanish, are formulated in a simultaneous two step process, during which one teases a crochet needle through a section of hair until it is matted, then twisting the resulting tangles. Once completed, the individual partitions dangle like course vines stemming from the wearer’s head.

In Argentina, this process of locking is mostly conducted in an informal manner at neighborhood fairs by groups of hippies. There are not many places to get them done professionally in Buenos Aires. Most sought out by the younger generations of Argentina; the girl with a spiked lip piercing at the bar or that college grad at the park with a skateboard and skinned knee cap, las rastas are a commonality in Buenos Aires, and have been for a substantial amount of time. “They started to get popular around 10 years ago”, Nicolás shoots through the receiver, “but only with certain groups, not everyone.”

One of the more notable groups within this demographic is the Rastafarian, a practitioner of the Rastafari religion from which their famously sacred hairstyle assumes its Spanish moniker. The movement began in Jamaica during the 1930s. Its followers believe in a black God (Jah), that members of the African diaspora (now exiled and lost as a result of the colonialist slave trade) are destined to return to their ancestral lands on the continent, and that the is messiah incarnated in Haile Selassie, emperor of Ethiopia from 1930 to 1974.

Being a lifestyle in addition to a belief system, there are many popular elements of the culture that its followers are known to adhere to, their dreadlocks being the most visible. Additional aspects of the Rastafari movement common among Argentine loc-wearers include displays of the religion’s three representative colors: red (for blood), yellow (for mineral gold), and green (for earth), as well as a perpetual consumption of marijuana, to the Rastaman, a special gift from God.

“They are [locs] associated with people that smoke weed” Nicolás chuckles before emphasizing his refusal to partake. But, despite the demographic’s acquisition of all things deemed Rasta, it is not belief that influences the trend. Rastafarians make up a very minute percentage of the overall population of  Buenos Aires (they only total a million world wide). Here in Argentina, locs do not have much of a religious significance. Rather, they serve as a fashion statement. The Rastafari lifestyle, spread through its musical counterpart of reggae, is simply viewed as an aesthetic.

Reggae is a trance inducing sound born from the slums of Jamaica. It arrived in Buenos Aires with the imported records of esteemed musician and Rastafarian prophet, Bob Marley, at the start of the 1980s. Instrumentation typically consists of a guitar, an organ, the bass guitar, drums, and an array of horns that all come together in a symphony of island passion. Due to the multitude of Rastafari practitioners utilizing the genre to decree their values of love, peace, and black unity, the music’s culture is intertwined with that of the religion, to the point that one necessitates the mention of the other. And when the sound touched base in Argentine, so did the Rastafari.

“Wherever reggae goes Rasta follows” Pablo Kalezic asserts. On the right side of his corded neck rests a thickly tattooed black ankh, an Egyptian hieroglyph that resembles a hooded cross. It is not an image associated with the Rastafari, but the symbol displayed proudly atop his skin illustrates his connection to Africa. According to him, “music is a part of righteousness” and reggae is the music of the poor, the sound of the rebel. A forty-three year old Rasta since the age of sixteen, the drummer sees that today the music’s culture “is more cool than spiritual.” Pablo does not have dreadlocks, as he states they “are not a necessity.” Yet, this does not stop him from having an acute sense of their importance. “Half of the people that have the locs don’t know the history behind them nor Rasta…” he states with a slightly heated exasperation.

Later, on the phone, Nicolás even states that most dreaded Argentines are “not usually Rastas, just people who like the culture,” himself included. The Rastafarian religion is one of inclusion, with love being its biggest requirement. But its core values, such as the black exodus from a white oppressor, prove to be a polarizing ideology for those who do not fit into the category of lost, sanctified children. Thus, reggae music serves as the non Afro-Argentine’s/ Afro-descendant’s relation to Africa and blackness.

As reggae becomes more and more popular in Buenos Aires, so will the hairstyle, though the fashionability does not seem to ensure its longevity. The trend carries with it societal connotations of filthiness, laziness, and weed (known as ganja to the Rastafari). Pablo affirms that in some places the hair is “treated like a crime,” and having the style often interferes with potential work. Many locals that once had the locs eventually cut them off as they get older. For Parodi, out of a work base of 2000 people, he was the only one with dreads. “There are not many white-haired people with las rastas” he professes. 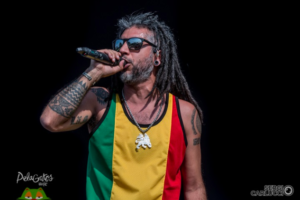