The event features an eclectic variety of food and culture. Framed by Soho’s cast-iron architecture, the festival blends the backdrop of old New York with contemporary concoctions in not just Italian, but Mexican, Asian and Cuban cuisines. “In a world with so many divisions, food makes everybody happy. There’s no boundaries with food,” said Anthony Curatola, one of the vendors, as he handed me a cheese calzone with a side of spicy sauce. At the festival, there is no apparent segregation or categorization: fried eggrolls feature next to assorted Italian cookies and cheese; wine and Pina Coladas fare equally well with visitors; bubbles and Cuban cigars are blown by the young and the old with the same joviality.

As I turn left onto Grand Street, I come across an elderly man sitting leisurely with his beer, who happens to be the National Vice President for District 22 of The American Federation of Government Employees. For Griff Mulligan, “This a way for the people to heal and celebrate diversity.” Further down the street, Ada, an Italian immigrant from Calabria, sells the last of her pink and yellow lemonades as she talks to me, “There are a lot of different activities throughout the day. There’s the cannoli eating contest, evening music performances, and of course, Anthony’s eggroll stand.”

Community seems to exist, even in this temporary, ethnically diverse street fair – such is the magic of New York City. 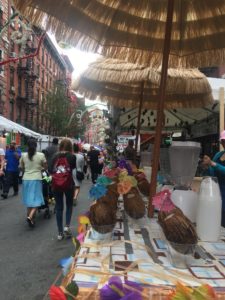