Major streets are blocked off. The subway is packed. Sidewalks are crowded and Survivor’s “Eye of the Tiger” blares from multiple directions, the bass turned up so earth-shatteringly loud that it can be heard through the Nassau Station underground. Despite all the commotion, the atmosphere in Greenpoint is not one of stress. It seems that today, on the morning of the 2017 TCS New York City Marathon, New Yorkers do not mind the disruption to the city’s sights and sounds. 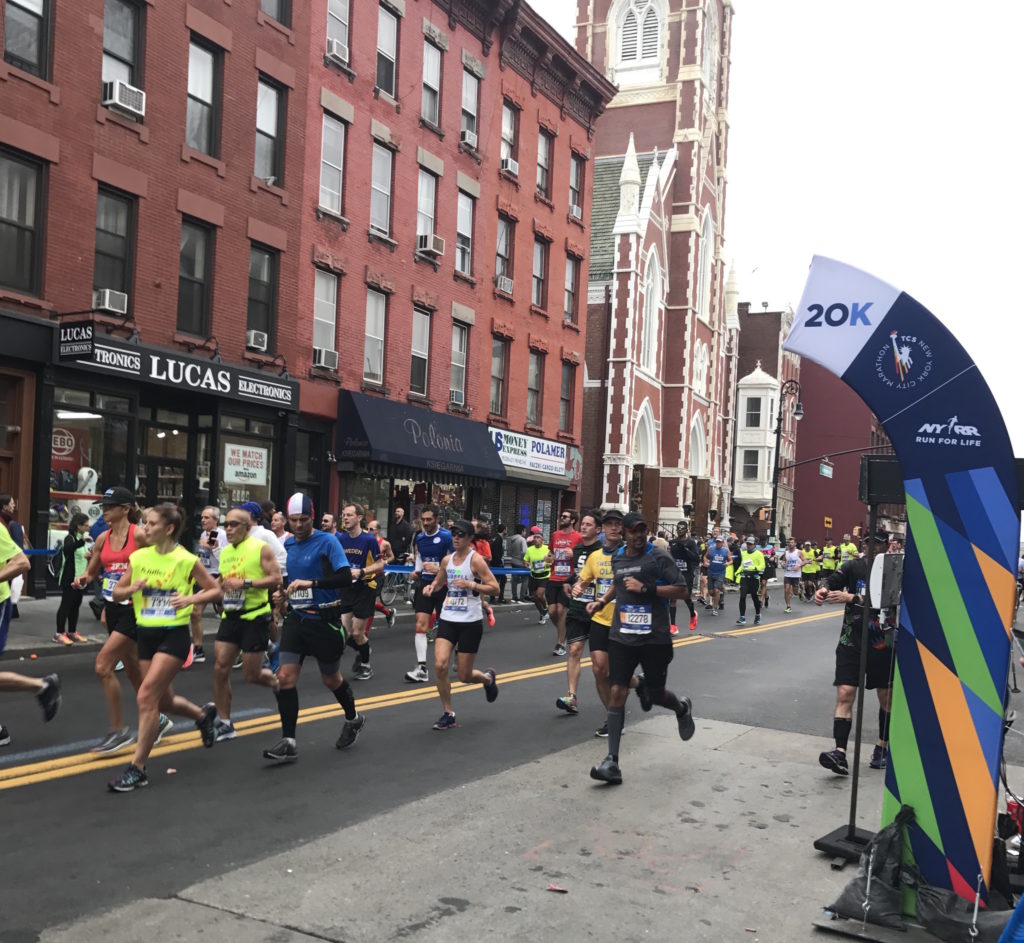 At the corner of Manhattan Avenue and Greenpoint Avenue, spectators crowd along the street to see runners prepare to cross the Pulaski Bridge, marking the halfway point of the race. Neighborhood residents and international travelers alike bring the enthusiasm, practically dangling off fire escapes to wave posters and handing out free bananas by the bunch on the sidelines. There is a slight drizzle in the air, but that doesn’t deter the bands set up every few blocks playing covers of 80’s rock songs.

Christina, a resident of the neighborhood, came to the bustling intersection to cheer on three of her friends. “I’m two for three so far. I missed one,” she says, her neon pink poster rolled up below her arm. She has watched the race here four times now, though she claims she would never want to run it herself. Still, she loves the energy that the race brings to her area. “I think it’s really inspirational, and the camaraderie is great.”

While some only have to go out on their balconies or sit on their porches to see the race, others have to plan their trips months or even years in advance. Sharon, a woman in her mid forties, came all the way from South Africa with her husband to cheer him on in his first marathon. She stands on the sideline with a friend waving a full-size South African flag. She has never visited the city before this week, but her husband’s decision was more about timing than location. “Basically, it was in a year’s time from when the decision was made, and that’s enough time to train,” she says with a shrug.

A sight that brings a smile to the faces of nearly every runner that passes is a man in a full cow costume leaning over the sideline barrier, furiously rattling a cowbell and screaming cheers. Brian, who is from Seattle, is donning the outfit to cheer on his girlfriend and her sister, and chose the location because it’s nearby their Airbnb room. His favorite part of the race so far is the reactions of runners when they see total strangers cheering them on. “You can call anybody’s name here,” he says, then proves his point by screaming, “LET’S GO, MARY!” at a passing runner in a pink t-shirt with her name printed across the front.