“I’ve learned to live with my limitations,” Eila Koski, 73, says as she plants one crooked foot before the other, one frail hand gripping a swiveling chair while the other grasps a shaking cane. She hobbles down her apartment’s narrow hallway to her bedroom, where piles of newspapers, sheets, magazines, boxes, and socks are stacked on every surface. A wardrobe sits in the corner, drawers open and shirts draping out. Koski’s own shirt is a bit too large, perhaps having fit in the past, but now slips off her left shoulder as she pushes stacks of paper off her armchair so she can sit down. 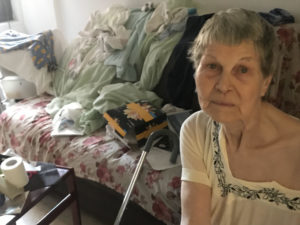 Ms. Koski is among the 560,000 elderly in New York City who are confined to their homes. These men and women comprise 40 percent of the city’s elderly population, reported in the 2010 census. She also belongs to another isolated group: homebound elderly who don’t expect any visitors this holiday season, except for a brief food delivery from Citymeals on Wheels.

In New York City, 44.3 percent of people 85 or older live alone and often live below the poverty line, according to a 2014 report by the NYC Department for the Aging. The study states that elderly people living alone in the city risk social isolation, contributing to factors of disability and deprived access of care.

New York and other cities tend to have more isolated elderly because people are living longer and having fewer children, says Victor Rodwin, 67, an NYU professor of health policy and management. It’s especially common on the Upper East Side, where Koski lives, because many elderly residents, the majority female, are “house-rich but cash-poor,” he said. They can afford their often rent-controlled or stabilized apartment, where many have lived for decades, but live on fixed incomes and struggle to buy groceries and other necessities.

Citymeals on Wheels feeds more than 18,000 homebound seniors delivered by about 300 staffers. The busy schedule leaves little time for socializing. “There’s a very small window that our staff can spend with the seniors because they have so many meals to deliver,” said Vivienne O’Neill, director of volunteer programs. But she said that the staff still make time for some friendly conversation and that those few minutes make a huge difference in the lives of the seniors.

Many volunteers are well aware that they do more than just deliver food. The work is a mental health project, according to volunteer Veronica Torres, 18, a New York University student studying global public health. “Their lit up faces when they see us at the door with food is indescribable and invaluable, and they deserve to have that more often than just through deliveries,” Torres said.

Since it began in 1982, Citymeals on Wheels has tried to find new ways to make connections with the elderly, such as its hand-written holiday letter program, as well as the “Senior Chat” and “Senior Script” programs where volunteers can create a written or online correspondence between themselves and isolated seniors.

Yet the thousands of socially isolated elderly in Manhattan are largely unseen, said Alicia Flores, the volunteer supervisor for Citymeals on Wheels at the Stanley Isaacs Neighborhood Center on 93rd Street. Flores insisted that seniors need to see “friendly faces” more often. “We need more people to go and just talk to them,” Flores said. “If you say you don’t have to go and deliver more meals, they keep you there forever! It’s sad, it’s really sad. But it is what it is.”

For some, like Eila Koski, 73, there’s no family left in the U.S. She emigrated from Finland in 1968, and most of her relatives live in Sweden. She’s lived alone at the Knickerbocker Plaza apartment building on Second Avenue for five years, and said that she has not seen any family since 2013. “They have their own life,” Koski said. “My children have their families, work, and their children. They can’t just come here.” She has two older siblings who have not visited her due to their own health problems.

Koski used to enjoy outings to the Isaacs Center, but has not gone for years due to health problems. “Taking care of myself takes all of my time and energy,” Koski said. “I would probably have gone to Sweden myself by now if not for my health problem.”

Asked about her plans for this coming Christmas, Koski expects to enjoy a holiday meal in the quiet of her home. “I know it’s not possible to see my family more,” Koski said, her fingers fidgeting with the spectacles in her hands. “I have had enough entertainment in my life, I don’t really require anything.” Yet upon leaving her home, she leaned over her armchair, widened her large, blue eyes, and asked, “Do you have to go?”