Is Gender The Reason?

“The very act of being a female athlete is radical.”-Kavitha A. Davidson stated, a sports and society writer for the Athletic.

The league was established 47 years after the NBA. As the first professional sports league for women in the United States, the league has had a mission of breaking social norms.

Social activism has consistently been a core value for players in the WNBA.

“The WNBA is made up primarily of women. It is women, trans people, and queer people. Everyone in the WNBA experiences marginalization in some way, shape, or form,” award-winning writer for ESPN, Katie Barnes said. “Many of the people in the league experience multiple layers of marginalization…So you understand what it is like to not have all of the privileges that are conferred upon other people in our society.”

From the beginning moment of their time on the court, the players in the WNBA have resisted society’s expectations of how professional athletes should behave.

“We are a walking protest at all times as WNBA athletes. If you think about it, we have so many different stigmas,” Phoenix Mercury forward Mistie Bass said. “We’re just constantly in the fight. I don’t think we have ever not been in a fight for equality, for justice.”

Sheryl Swoopes, a founding member of the league, is an example of this activism. She discovered she was pregnant right before the WNBA’s commencement season in 1997. Swoopes got back on the court only six weeks after giving birth. She set an example for female athletes around the country, who did not want to have to put off their careers to have children.

In 2005, Swoopes became one of the highest-profile athletes in the nation to come out as a lesbian.

“I still get messages from people saying, ‘You saved my life,’ from parents saying, ‘Thank you for helping me understand my child,”Swoopes states in a New York Times article, How the Most Socially Progressive Pro League Got That Way

Athletes utilizing their platforms to break social barriers has been an integral part of the WNBA since its inception.

“There was a time when the WNBA never embraced that it had gay players, let alone gay and lesbian fans and now they have a whole pride month,” according to Melanie Jackson, a senior editor at ESPN.

The league has not always had a positive response to the players’ voices though.

“Back in 2016 after Philando Castile and Alton Sterling were both shot and killed the WNBA was at the forefront,” Jackson said. “The coach of the Minnesota Lynx, Cheryl Reeve, pulled four captains aside and said ‘let’s find our voices, let’s use our platforms.’ They showed up in the pregame wearing Black Lives Matter T-Shirts… eventually three more teams stepped up… New York Liberty, Phoenix Mercury, Indiana Fever, and Minnesota Lynx were each fined 5,000 dollars by the league… It’s ridiculous.” 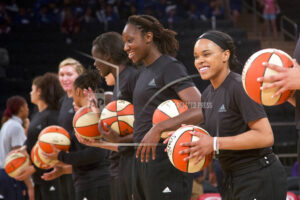 Members of the New York Liberty basketball team await the start of a game against the Atlanta Dream, Wednesday, July 13, 2016 in New York. Between the Black Lives Matter movement, the Orlando shooting and the LGBT community, more WNBA players have been taking active roles in expressing their views on social issues. In the midst of “Camp Day” at the New York Liberty’s mid-morning game Wednesday, Liberty players stood in solidarity as they donned all-black warmups in support of the Black Lives Matter movement. (AP Photo/Mark Lennihan)

Less than 24 hours later the league rescinded the fine after realizing it was a mistake.

Since then, the WNBA has evolved immensely. An example of this is what occurred this past 2020 season in the “bubble”.

In fear of spreading the coronavirus during this global pandemic, WNBA teams were isolated in a “bubble” where they would continue their season safely.

After the murders of George Floyd and Breonna Taylor, as well as the shooting of Jacob Blake  at the hands of the police, WNBA players protested, stating they would not play unless social justice became a part of their initiative.

“For players, addressing social justice was a requirement,” according to the Los Angeles Times article.“Go reboot the pandemic-suspended season this summer after societal unrest stemming from George Floyd’s killing in May.”

Washington Mystics players linked arms and knelt in T-Shirts that spelled Jacob Blake’s name in black ink. On the backs of the shirt were seven blood soaked bullet wounds, one for each shot police officers fired at Blake.

After many public protests and ultimately refusing to play, players sat down with the commissioner of the WNBA and formed a social activism council.

“Teams will wear special uniforms to seek justice for the women and girls, including Sandra Bland, Breonna Taylor, Vanessa Guillen and many more who have been the forgotten victims of police brutality and racial violence,” the league stated.

Not all the owners of the WNBA were supportive of this activism.

Former Senator of Georgia Kelly Loeffler, who had held a 49-percent stake in the Atlanta Dream, contested the WNBA’s embrace of the Black Lives Matter movement. Due to Loeffler’s stance, players from her own team campaigned against her.

Players from the Atlanta Dream, Seattle Storm, Phoenix Mercury, and Chicago Sky publicly supported her opponent Raphael Warnock,who went on to beat Loeffler in the Georgia Senate race. They wore shirts with the printed message: “Vote Warnock” during pregame warmups.

“It’s clear that the league is more concerned with playing politics than basketball,” Loeffler stated.

The boards of both the WNBA and NBA went on to unanimously vote for the sale of Loeffler’s stake in the Atlanta Dream.

As part of the sale, former player Renee Montgomery is now a part owner of the Atlanta Dream. Montgomery broke boundaries as the first former WNBA player to become an owner.

“My dream has come true,” Montgomery articulated. “Breaking barriers for minorities and women by being the first former WNBA player to have both a stake in ownership and a leadership role with the team is an opportunity that I take very seriously.”

In only 25 years since its inception, the WNBA has been a trailblazer for unified activism in professional sports.

Considering the great strides the league has made in such a short period of time, why hasn’t the WNBA gotten more public acknowledgement for it?

“Masculinity is often taught and maintained as a status that is superior to femininity.” According to an article in Psychology Today.

If female athletes display strength and dominance in their professions, they are threatening the male ego.

“Male ego. It’s an amazing thing. There’s something about women being good at something that bothers some men,” said Devereaux Peters, forward for the Phoenix Mercury, in a  roundtable talk with fellow WNBA players . “Anytime a woman is in power, the rules are kind of different for them, and some males feel threatened.”

“Mainstream sports media outlets are essentially ‘mediated man-caves,’” Dr. Cheryl Cooky, a professor of American studies at Purdue University  told The Nation. “It’s a space where men can go and know it’s going to be by, for, and about men.”

This culture of sports being a “man cave,” described by Dr. Cookly, greatly affects how female athletes are treated by the media.

The way women’s sports are perceived, by the general public, is centered around the way the media covers them.

According to a recent article Women’s Sports Lack Coverage, So Alex Morgan and 3 Other Athletes Started Their Own Company : “42 percent of participants in high school and college sports are women, and women make up 40 percent of athletes on the professional level, yet, according to the United Nations Educational, Scientific, and Cultural Organization, they only receive four percent of all sports media coverage.”

“You see how people bend over backwards to talk about Kyrie Irving saying how he maybe won’t go to the bubble. Meanwhile, you’ve got actual players sitting out for various reasons, some of which are explicitly to commit themselves to social justice…” ESPN writer Barnes says, “ I think that is explicitly because of gender.”

This is not the first instance of NBA players getting attention for activism that originated in the WNBA.

“Angel McCoughtry, she put out a tweet saying ‘hey this season we should put Breonna Taylor’s name on the back of our jerseys’. That’s where the idea originated from. It wasn’t an NBA player.” Says ESPN editor Melanie Jackson, “It’s all about the platform. We need to listen to our female athletes, these strong women.”

Female athletes are beginning to take media coverage into their own hands through the creation of a new sports platform known as:  Togethxr. Pronounced “together,” the company’s name has a second meaning: “to get her”.

This new media company was founded by star athletes Alex Morgan, Simone Manuel, Sue Bird, and Chloe Kim. The platform will focus exclusively on women’s professional sports. The hope is that with more attention through media platforms like Togethxr, female athletes will go from to the sidelines of sports media coverage to center court.

“It’s all about being able to listen and try to hear an alternative perspective and try to walk in another person’s proverbial shoes,” Barnes expressed “and be willing to stand up and stand by that person.”